Well, on September 17th, 2 weeks before our departure for Europe, Air Canada canceled its afternoon flight to Penticton and now had us leaving Toronto at 18:30, arriving in Vancouver at 20:38, then leaving the next morning for Penticton at 08:50.

Dear ROSALIND,We’re sorry as a part of your itinerary has changed due to unexpected business or operational constraints on our planned flight schedule and we have automatically rebooked you on another flight.

This change also affects any customers you are traveling with on this booking.

We apologize for the inconvenience. 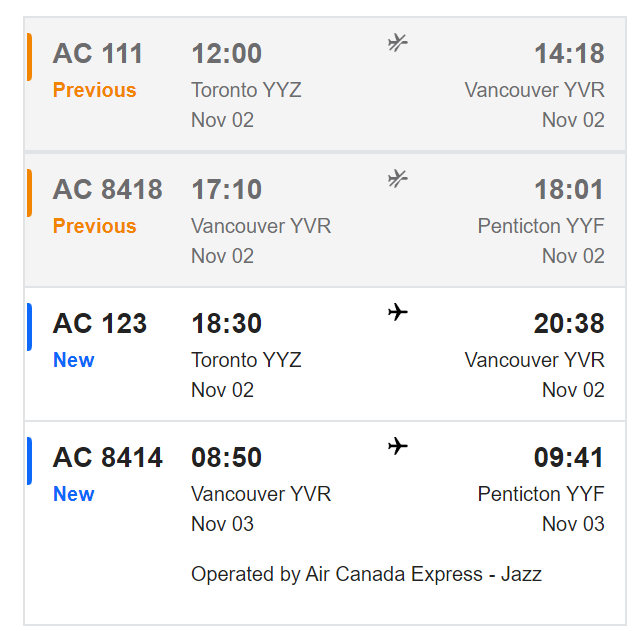 Now we had to book an overnight stay at a hotel. The Vancouver Fairmont Airport was the obvious choice if we wanted to enjoy a late dinner on arrival, rather than slurping ramen noodles on the flight. Added cost to our trip, $346.80.

It’s a good thing we booked the Fairmont too, because that 18:30 flight out of Toronto didn’t leave until 23:30, landed at 00:18 in Vancouver and we didn’t get to the hotel until 1 AM, because we had seats at the very back of the bus, which were changed to 43A and B, yet I did NOT get a refund for the $18532 I paid for the preferred seating.

But that is NOT the only issue.

Air Canada charged us $39.90 for checked baggage for EACH leg of the flight, contrary to their own stated policy as shown in the graphic below. 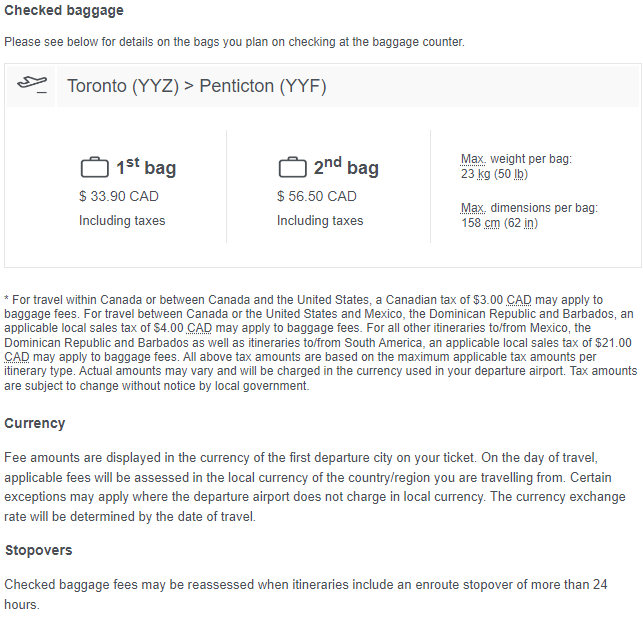 Our check-in in Toronto took 45 minutes LONGER than it should have because we couldn’t print our bag tags because I refused to pay that charge at the self check-in. After waiting those 45 minutes in line, I decided to pay the fee and deal with it later.

Too, we didn’t have access to our bags while in Vancouver because they were checked through to Penticton.

Do you know why I didn’t ask before now? Because there were dozens of people on that delayed flight who missed their connections and lost their hotel reservations, which I hope you have actually dealt with by now.

On Tuesday, May 18th, 2021, at 14:30, Jasper the Chocolate Labrador - my heart, my love, my joy - was released into the Happy Hunting Grounds. Over several months, Jasper's ability to walk rapidly decreased. He went from walking 4 miles easily in … END_OF_DOCUMENT_TOKEN_TO_BE_REPLACED

If you read "My Cancer Journey: One Year in a Nutshell" and wondered why I only encapsulated what felt like a very long year, dealing both with the COVID pandemic and my experience with cancer, well, here is your answer. I did contemplate blogging … END_OF_DOCUMENT_TOKEN_TO_BE_REPLACED

After the horrific experience with the locum at my doctor's office on July 26th, 2019, where the locum pronounces me dead, our Canadian / British Columbia medical system took over... thank goodness! I was booked for multitudinous tests and doctor … END_OF_DOCUMENT_TOKEN_TO_BE_REPLACED

On returning to Canada after learning that I had lesions on both my lungs and probably had cancer, I immediately phoned my doctor's office to book an appointment, which they had refused to make when Ed phoned them and explained the … END_OF_DOCUMENT_TOKEN_TO_BE_REPLACED