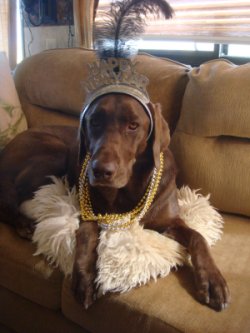 We brought home party spoils for Jasper, but he wasn’t too enthused or amused by the event.

During the month, we moved between sites at McDowell Mountain and Usery Regional Parks, and Catalina State Park in Arizona.

Highlights included visits with our friends Tom and his dad Gordon, a hockey game for Ed to see the Maple Leafs play in Phoenix, and a trip to Cosmo Dog Park in Gilbert for Jasper.

Otherwise, our days were filled with hiking/biking the parks, massages for me and day-to-day living in Arizona. 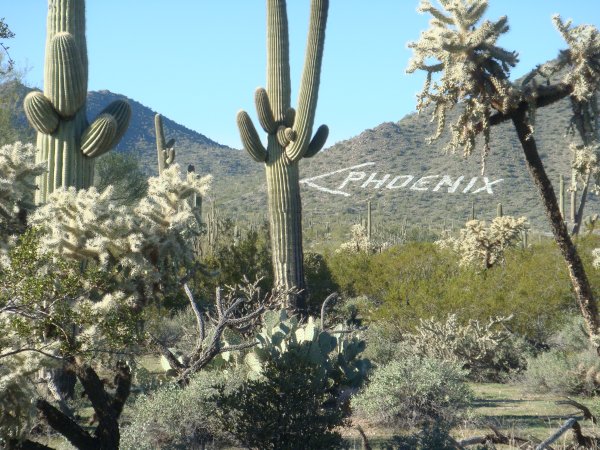 February was all about hanging with friends, old and new.

We re-connected with our camping buddies, Bill and Georgie, for 2 weeks in adjoining non-electric sites in the A-Loop at Catalina State Park. During that time, we enjoyed lots of eating, festive beverages and hiking to burn off those festive beverage calories. 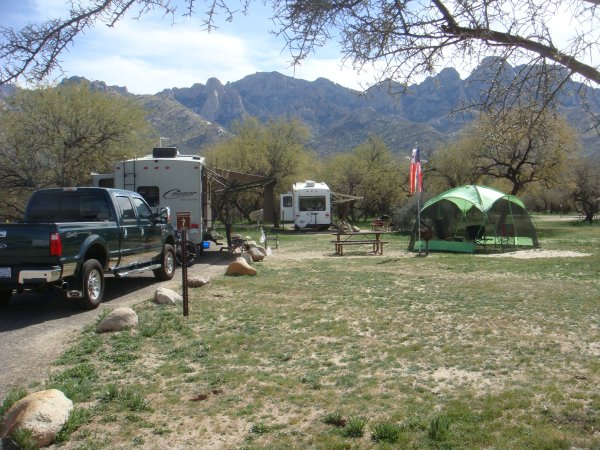 Through them we met 2 other good couples and also spent time with Rob, Jacqui and their Chihuahua Diego from Kelowna, whom we’d met at McDowell in January. 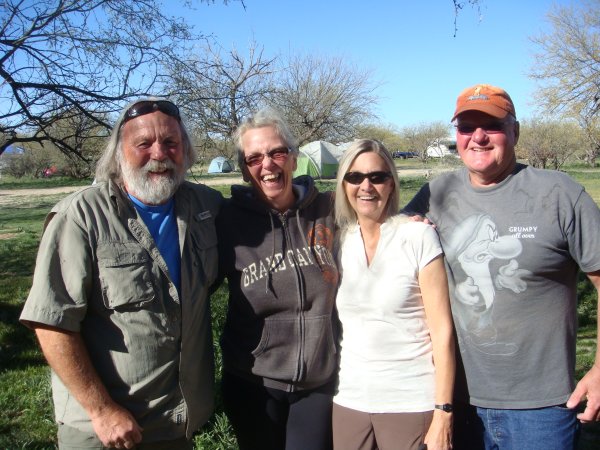 On March 11th, my Dutch cousins Gerrit and Truus flew into Tucson, from where we began a 3-week exploration of all things great in Arizona and Nevada. What a FUN time we had together.

The highlight of that month was a helicopter flight over the Grand Canyon with Maverick Helicopters. 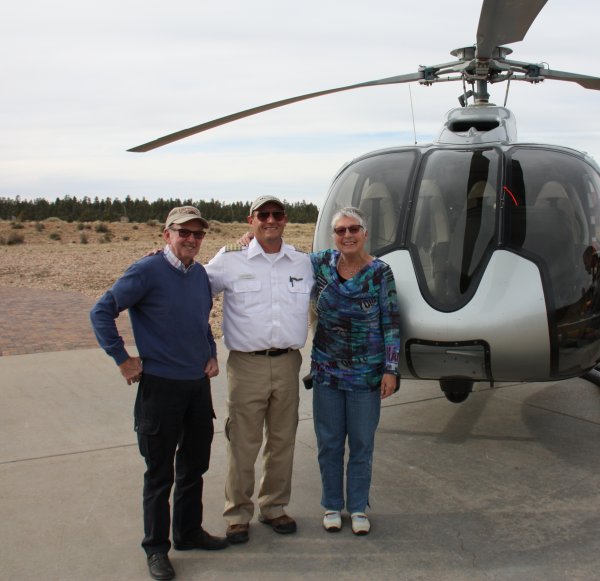 Ed and I left Las Vegas on April 2nd heading for Canada. A slight diversion took us to Cape Lookout State Park on the Oregon Coast where we spent a week.

We arrived in Penticton on April 14th… one day shy of our 6-month maximum permissible stay in the United States.

After a 6-month absence from home, the first few weeks back was rife with ‘catching up’ visits to dentists, doctors, lawyers, bankers, veterinarians and other ‘life-enhancing’ professionals.

I was ecstatic to see our friends from ‘the street’ and my trusted hair stylist, massage therapist and chiropractor again. The annual visit to the doctor wasn’t great — he found a mysterious ‘lump’.

On May 6th, during a drive to find plants for my never-ending landscaping project, we stopped by Sundial Road on Vaseux Lake in Oliver to see if there were properties for sale — as I’ve done each and every time I’ve driven by that road for the past 25 years.

The perfect lakefront property WAS for sale and we started the buying process immediately.

The house in Penticton was listed a few days later.

While we cleaned, cleaned and cleaned some more for the multudinous house showings, tried to arrange suitable financing on a new property AND waited for test results to explain my ‘lump’ — my mother’s problems got worse.

What I’ve failed to mention so far, is that my (at the time) 99 year old mother had been complaining incessantly about her neighbour’s solar system. Every weekly call to her since September of 2013 became more concerning as she complained that she could hear, see, smell, taste and feel the effects of their solar system.

By the end of May, their solar system was ‘burning’ her to the extent that she felt she had to wear a rain coat and hat in her house and she was contemplating sleeping in her garden shed to avoid the ‘fallout’.

She also claimed that they were drying marijuana in their garage for sale back to the government. (We had told her that the neighbour sold his energy back to the grid and that was how her mind morphed that scenario.) She called the police, fire department and city officials to report her neighbour’s transgressions.

Note: My mother had been repeatedly invited to move to the Okanagan Valley (where we live) since my father passed away in 2001. She could have purchased a lovely home on a bus route or a condominium within walking distance of all services she would ever needed. She refused to entertain the idea… ever.

Late in the day on May 15th, 2014, my mom called to say that she was dying of renal failure and that we needed to get to Toronto as soon as possible. After making arrangements for a lengthy absence from home, we flew to Toronto early on May 17th to find my mom hail and hearty .. thank goodness!

After returning to Penticton, I wrote a detailed letter to my mother’s physician explaining her delusions and requesting help. The help from Canadian/Ontario government sources came pretty quickly, but it was sadly lacking in coherence. To this day, some agencies are still unaware of what has transpired since.

In early June, I passed both the written and driving portions of the Class 5 driver’s licence to tow a trailer weighing more than 4,600 kg, fully loaded. On the 14th of June, we set off for Red Deer to pick up the 5th wheel of our dreams that we’d ordered in February. 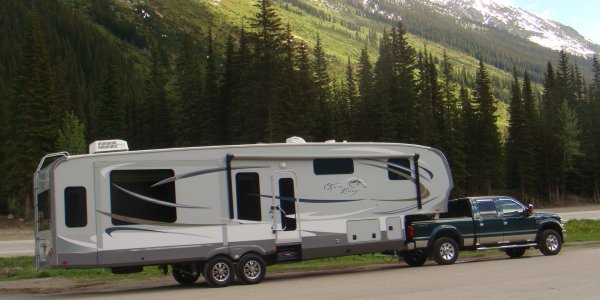 During that trip, Jasper became very ill with a stomach ailment, and I spent most nights in Red Deer up and out walking with him… a better prospect than having him defile our brand new rig!

With a good vet’s help, we were finally able to leave Red Deer and claim one night of our planned 3-night stay in Banff, Alberta at the beautiful Tunnel Mountain Trailer Court Campground.

In late June, after 9 weeks of tests and waiting for results, I finally learned that the ‘lump’ was nothing. Yay!

On base, this should have been the perfect Okanagan summer. We enjoyed HOT dry weather every day throughout the July and August. Perfect for lounging around the pool with friends.

This July and August however were filled with regular house showings, i.e. LOTS and LOTS of house cleaning. It seems that the showings always happened the day before our beloved cleaning lady was scheduled to visit. 🙂

Fortunately, we also enjoyed many visits with friends.

The best visits were of the impromptu sort. I’d told our neighbours that they were welcome to use our pool anytime, without having to ask or notify us in advance. It was GREAT fun to have them show up in our backyard with the grand-kids. The kids and Jasper had a blast in the pool. 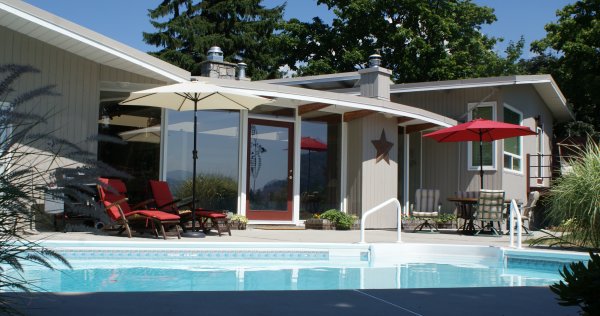 In mid-July we took possession of the Vaseux Lake property.

In mid-August, I was informed that my mother had signed a lease to move into a one-bedroom apartment with kitchen in a retirement residence in Mississauga, Ontario. There she would enjoy 3 square meals a day, maid service and 24-hour access to onsite medical care.

But of course, it couldn’t have been THAT simple.

A few days later, she DENIED that she’d signed the lease. It took MUCH doing and many people to convince her otherwise.

My mom moved into her new digs on the 12th of September and Ed and I flew in on the 14th to take care of her house. We spent the next 10 days selling and clearing out the remaining items AND finding a buyer for her house. 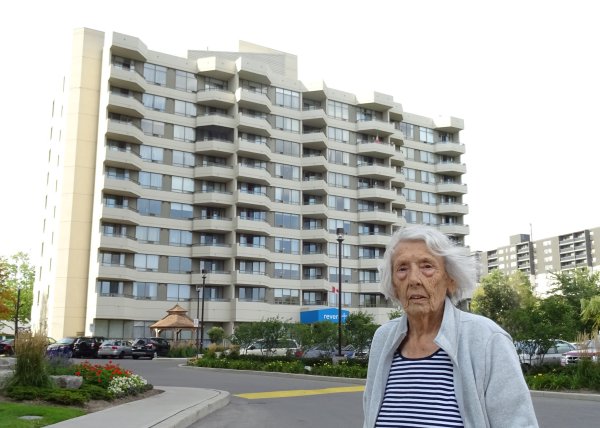 Fortunately, October was a little relaxed, knowing that my mom was finally safe and sound.

We celebrated Thanksgiving with our good friends/neighbours Les and Donna here at home, took our house off the market and started preparing for our winter travels down south.

Ahhh… but such was NOT to be.

There was my mom’s 100th birthday to celebrate on November 16th. Guests, party room, cake, champagne, family dinner and more to arrange.

We flew to Toronto on November 12th. After spending the afternoon of the 13th with my mother, we greeted my cousins Ank, Truus, Gerrit, their daughter Corina and her son Pepijn at the airport. My cousin Gerrie, her husband Daan and their daughter Yvon arrived on the 14th. We celebrated the eve of my Mom’s 100th at her favorite restaurant (the Mandarin) with family on the 15th and her birthday at King Gardens on the 16th. 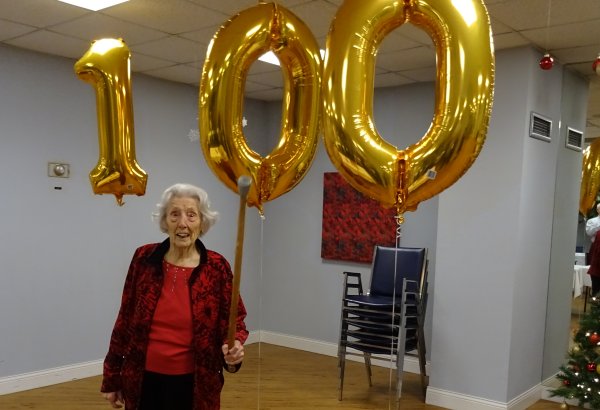 We returned home on November 21st. Jasper was acting strange after we picked him up from the kennel.

Turned out he was sick with a very bad infection, bad enough to require a cone for the first time in his almost 5 years of life.

The MOST fun we had in December was demolishing the double-wide trailer and little cabin at our property on Vaseux Lake.

Demolition Day at the Lake from Rosalind Gardner on Vimeo.

My birthday on the 11th was a bust – no call from Mom and my first heartrate-out-of-control incident in more than 6 years. It’s a condition induced by stress and that will probably kill me if I can’t control it… ie. learning how to control stress.

Fortunately, the year to come looks pretty peaceful indeed. Now that my mom is in a safe place, all we have to do is sell this house, then plan, build and move into the house on the lake. SIMPLE! 🙂