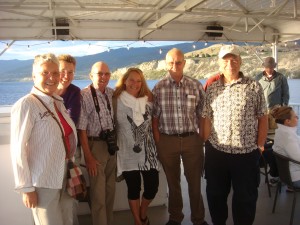 Hard to believe, but I’ve actually felt relaxed for the past week.

Had the relatives from Holland staying here for 5 days. (If you’re not Dutch, you have to realize that Dutch-clean is a saying because it’s true… they arrive with special sets of white gloves. 🙂 )

OK, granted, we went completely f’n nuts cleaning, renovating and landscaping for 2 months prior to their arrival and I could have killed Daan when he said ‘that needs painting’ (referring to the chimney base visible from the kitchen skylight, on the 1st day.

But other than that, their visit was simply fabulous – a REAL vacation not only for them but for us. Here are a few of the things we did during their stay:

and last but not least, had a real Canadian evening watching Game 6 of the Stanley Cup playoffs.