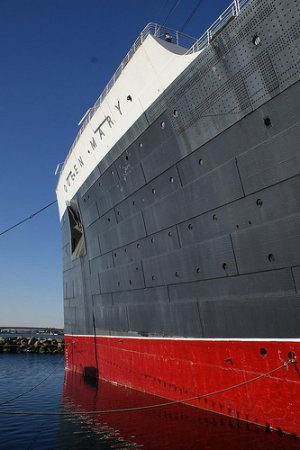 I’ve never been keen on dancing and Ed would probably rather jump off a cliff than do so, but neither of us could resist a spin around the ballroom on the Queen Mary in Long Beach.

Just the possibility that we might be tracing the footsteps of people such as Winston Churchill, Marlene Dietrich, Gary Cooper, Lionel Barrymore, Spencer Tracy, the Queen Mum, William Randolf Hearst and others was just too good to pass up.

After no one applauded our feeble efforts, we carried on with the tour. 🙂

We did 3 of the daytime tours aboard the Queen Mary, listed below. Text in italics is from the official Queen Mary site.

After getting our fill of the boat, we did the Scorpion Submarine tour, described as Explore an authentic Cold War-era Russian submarine, code name “Scorpion” and experience the life of a submariner. Ed’s the submarine fan, but not I. The tight dark spaces had me creeped out pretty quickly… and we were above water. Can’t imagine how anyone would actually want to work on a sub. Ugh.

After almost a full day of touring, we returned to the Observation Bar & Art Deco Lounge to enjoy a good brew, uninspired munchies and terrific ocean views. 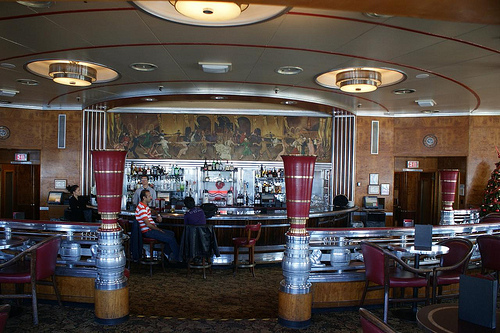 NOTE: a woman fell to her death from the highest of the Queen Mary’s gangways after spending time in that bar… the same night that we were there. So, if you plan to drink aboard the ship… walk (or crawl) right down the middle of that gangway on your way back to the elevator.

See our other pictures of the Queen Mary here.