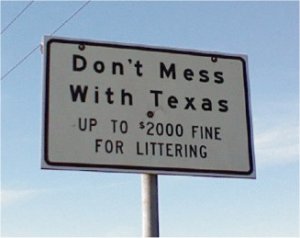 It’s no wonder you see “Texas is not your ashtray”, “Don’t Mess with Texas” and other anti-littering signs all over Texas.

The problem is horrendous… even in the state parks.

Nearly every State Park campsite that we’ve stayed at in Texas has been absolutely filthy with litter from previous campers.

None however was worse than Lake Casa Blanca International State Park in Laredo, Texas – despite anti-littering warnings and suggestions everywhere.

Having ‘always leave a place better than you found it’ well-ingrained in my make up, I always spend time cleaning our sites up of the trash left by others, so, on New Year’s Day, Ed and I did our little good deed and spent over an hour cleaning up the entire campsite. 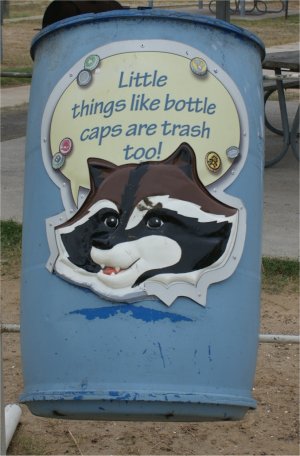 Sidenote: In Palo Duro Canyon in the Texas Panhandle, I was commended by another camper for picking up Jasper’s poop. He told me that he had been staying there for years and had never seen another camper picking up after their dog. UGH!

Having been to Mexico numerous times, it may be that this is a cultural phenomenon, due in part to the fact that country didn’t start recycling programs until relatively recently.

But seriously, the State of Texas could do more to take responsibility and encourage better behavior.

Roadsides all over the state are havens for garbage. It’s not unusual to see big green garbage bags on the side of the road that have obviously just been tossed from a vehicle. Trees and brush are frequently ‘decorated’ with plastic bags. Even in cities it seems there is no effort to remove such debris.

Go to any roadside stop or picnic area and the garbage containers are typically full to over-flowing. Perhaps more frequent pickups would help?

Maybe paying State Park employees (and there are enough of them) to clean up sites between uses help?

For example, you would be hard-pressed to find even one cigarette butt when you arrive at a Provincial Park campsite in British Columbia. After each camper leaves, the site is thoroughly raked and cleaned – even the firepits are completely dumped.

The State Park campsites in the North West states are taken care of likewise.

On the other hand, Texas campsites contain litter from many previous users and some of the firepits are left so full that they cannot be used at all.

It’s more than just litter too.

The sites simply aren’t maintained. Given a leaf blower and a pressure washer, I would have done a number to clean up the parking spot and the concrete picnic table pad. A little bit of weed-pulling would have cleared the gravel area and cement border area nicely. One or two more hours of work and the site would look brand-new. Left to deteriorate the way it is now and much more money will need to be invested to re-build the sites.

Personally, I found the garbage gross. 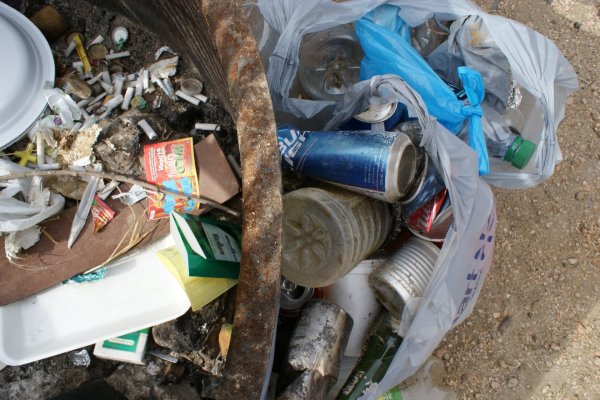 Moreover, I didn’t want Jasper (my dog) walking anywhere in the park, for fear that he would hurt his feet on broken glass and rusty bottle caps – not to mention pick up some bad bacteria from decayed food products tossed into the long grasses.

It’s shocking that the ‘trashy campers’ do not also see the potential for harming their own kids and animals with their disgusting behavior.