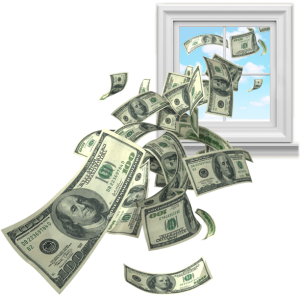 Yes, it’s true, I shop at Walmart on occasion, primarily due to convenience and expediency while we’re on the road.

But it’s come to my attention that we buy way more than we need at Walmart, mostly due to the fact that Walmart’s items are dirt cheap shit from China.

According to the labor center study, “Living Wage Policies and Wal-Mart: How a Higher Wage Standard Would Impact Wal-Mart Workers and Shoppers,” the 12.5 percent of store customers who account for 54 percent of all Wal-Mart sales and average expenditures of $9,775 per year.

That’s a THIRD of a a $30,000 per year income… and I KNOW people who waste at least that much money per year on crap they absolutely do not need.

ASK yourself if you really NEED that item before you buy it.

In most cases, the answer will be “NO”.

Take the money you ‘saved’ and pay off your debt or invest it in a secure investment to GROW your assets.

It beats the shit out of going bankrupt while buying meaningless crap for only $9.97.