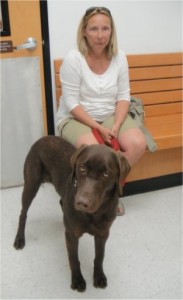 While I didn’t trust myself to have human children (due to my awful upbringing), at 50 years of age, I decided that I could be trusted to become a pet parent… moreover, to a puppy for whom I had longed for decades.

Enter Jasper, the Chocolate Labrador, whom Ed and I adopted at 8 weeks of age and has traveled with us far and wide ever since April, 2010.

Jasper has had multiple encounters with bad stuff on each and every trip we’ve taken him on, and I was thinking that Winter 2013/2014 would be the season that broke the chain.

One evening, while we were at Lake Havasu State Park, Jasper’s legs wobbled ever so slightly when I had him get up to go out for his late night ‘piddle’.

No one (my cousins were with Ed and I at the time) seemed to see the wobble but me… so I had Jasper get up and down a few more times before I called the emergency vet.

Sure enough – Jasper was diagnosed with EITHER an ear infection (probable) or a scorpion bite (less probable) due to the fact that he’d been swimming in Lake Havasu a LOT since we’d been there.

Armed with anti-biotics, we took Jasper home (back to the trailer) and he felt better the very next day.

We continued to feed him 3 times a day for the next 10 days until he was infection-free.

Just gotta say — it’s always me who gets him to emergency.

Thankfully!!! I LOVE my doggy!