OK, yes, it’s now early June and it’s taken me this long (months) to get over the shock of camping at Lake Havasu during March Break. 🙂

Actually, the whole experience was so much fun.

We rolled up in our ‘big rig’ (relatively speaking) to our reserved campsite at Lake Havasu State Park to see that the adjacent campsite was strewn with tents and other accoutrements obviously belonging to young campers.

I warned my Dutch cousins that our stay might be very noisy, explaining that this was March break – a time when college students took a week off to go nuts.

It wasn’t long before we met our neighbors, 3 young guys (Mike, Mike and Danny) from a college in the Denver, Colorado area.

I am so impressed with the young Americans we meet. They aren’t in the least bit shy, yet they are so polite and respectful of their elders.

Case in point – when they returned to their campsite and saw that we had newly arrived, they immediately came over to say hello and introduce themselves.

How cool is that?

So, to try and further ingratiate ourselves, I offered them our leftover salad complete with choice of dressings (enough for 6 boys) the first night we were there.

In return, they offered to share their medicinal marijuana from Colorado.

Not wanting to be party-poopers, Ed and I agreed to imbibe with them. It was my first time smoking pot in almost 10 years and the result was uber-pleasant!

During our discourse, I asked where their girlfriends were. In almost unison, they proclaimed that they “girls weren’t interested’ in them. How sad.

Over the next few days we saw their comings and goings and saw that a friend of theirs, who DID have female friends regularly parked his boat at their campsite.

One evening a large group congregated for dinner and afterwards, well… I can’t say what we saw happen in that boat … that would qualify as pornography. Suffice to saw that Edward and my cousin, Gerrit watched the 2 couples intently.

By the 3rd morning, I could tell that ‘our’ boys were wearing thin, probably due to insufficient sleep, nutrition and water.

Two of the three tents had collapsed and Danny was sleeping outside his tent. 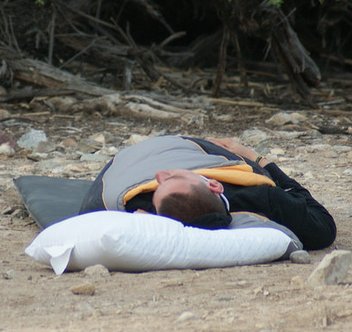 It was late morning before all 3 boys were up and about and Danny was most noticeably hurting.

I called over… “Danny, you NEED to drink some water”, to which he replied, “Yes, Ma’am” and proceeded to fill up his jug and libate.

What can I say?

I’d be thrilled if these kids were my nephews. They acted responsibly to the point that the park rangers didn’t call them on their infringements of campsite rules, i.e. that their gear was strewn well beyond the allowable limits.

I like how rules can be bent to allow for kids who are just having a good time and not hurting anyone.

And I’m totally cool with being the laid-back ‘den mother’ when need be. 🙂