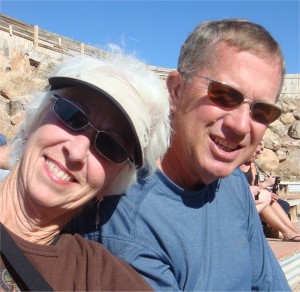 We REALLY lucked out big time on this trip.

In late January, shortly after we arrived at Catalina State Park, Shirley O’Kelly sauntered over to our camp site and introduced herself to Ed. Ed was significantly impressed enough to remember her and her husband’s name (Michael) to tell me about them when I returned to the site later… (highly unusual on Ed’s part).

I met Shirley the next day and ever since – well, we’ve become ‘attached at the hip’ as Shirley would say.

For the last 3 weeks we’ve shared, played and toured around together.
We traveled together from Catalina State Park to Tucson Mountain Park then Kartchner State Park and finally Roper State Park.

We’ve shared meals, stories, confidences and tons of laughs. Shirley and I have done laundry, gone for massages and walks. The 4 of us have hiked, played pool, cards, golf and even sung karaoke together.

They saw me through some tough times (Jasper was not well too) and Shirley told me to ‘buck up’ when necessary. Not many people in my life know when to tell me to buck up effectively, but Shirley’s ‘buck ups’ were always effective. 🙂

Jasper knows them as Auntie Shirley and Uncle Mike – the nice people took him hiking up to Duckworth (near Roper) and then to play in the snow.

We’ve about to part ways and my lower lip is protruding in a big way.

That said, I (we) are SO grateful to have met both Shirley and Michael and look forward to getting together and having more fun camping together in the future.

Note to Shirley and Mike: Be well friends. We love you!

Here are some pictures of our adventures with Shirley and Mike.