NOTE: I sent a link to this post to the Grand Forks City Council and the Mayor on the 15th of September. It’s now the 18th and I am STILL awaiting a reply. It’s obvious they don’t care for visitor impressions or how they affect their citizens. Any GOOD council would have responded within 24 hours.

We spent last weekend with good friends in Grand Forks, BC.

One needn’t spend more than a few minutes in Grand Forks to know that the small city has a huge problem with a deer population that is clearly out of control.

You can’t walk anywhere in town without having to pass in close proximity to one or more deer.

I found this particularly disturbing as my significant other was charged by a deer just recently while walking our dog near Oliver, BC. Charging a threat is a normal response to close contact with a human, but the deer in Grand Forks just watch and twitch a bit while you pass them by, so they’re, what… inured to humans?

To see a doe allow a human to walk between her and her fawn is simply unnatural. 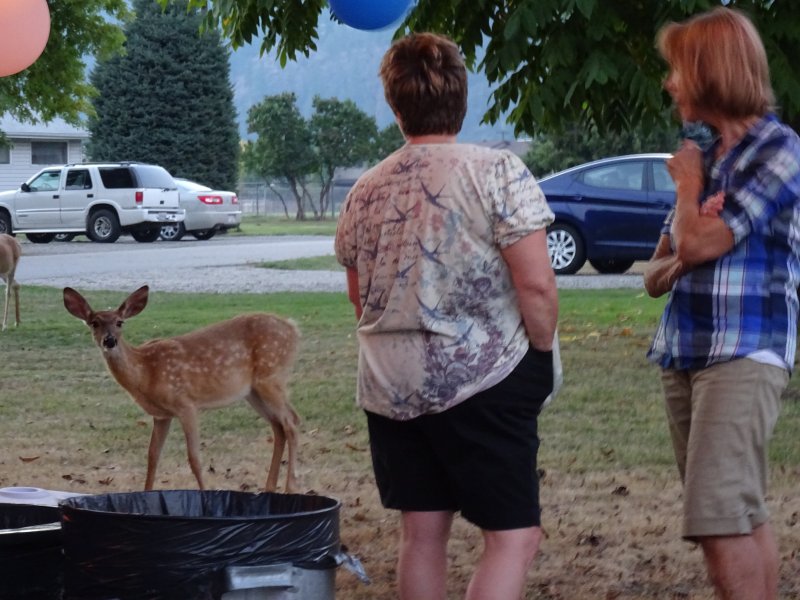 Too, the ‘resident’ deer (as locals refer to them) are in ghastly shape. Despite devouring unprotected garden vegetable plots and all manner of supposedly ‘deer-resistant’ plantings, the deer residing in Grand Forks are just skin and bones. Some of them were twitching in a very unnatural fashion when I saw them.

Clearly, those in favour of unfettered deer population growth within the City of Grand Forks have no appreciation for the true nature of wild animals nor their health… a very sad state indeed.

The locals with whom I spoke are all frustrated with the deer problem and disgusted by city council’s refusal to impose a cull.

BUT – get this – someone tossed a doe some food (a watermelon rind) as it approached a neighbourhood barbeque we attended. I suspect that people who feed the deer are a big part of the problem. Hint: Deer in the wild eat grasses, flowering weeds, and other non-woody plants. Making them even slightly dependent on food humans toss their way is guaranteed to reduce their lifespan and their quality of life in the interim. 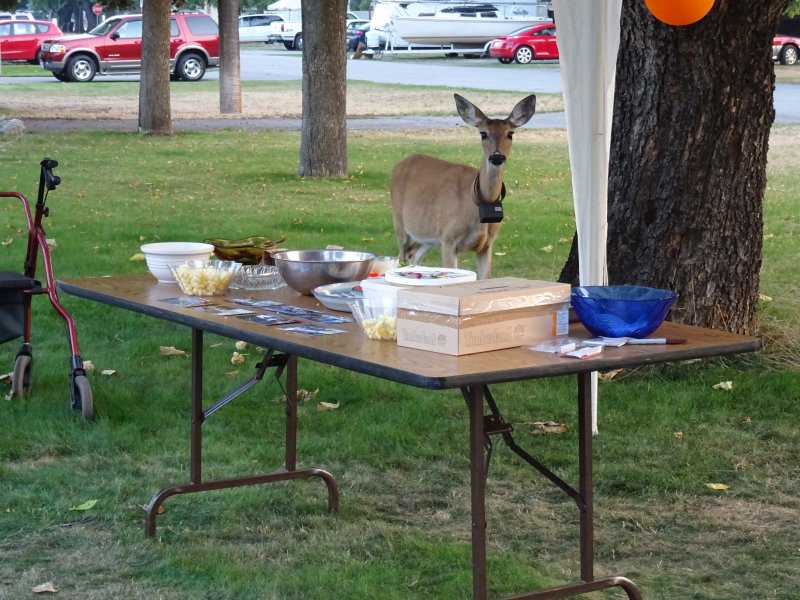 On doing a little research, I learned that the City of Grand Forks has 3 Committees of Council – Economic, Environment and Deer.

Can elected officials in Grand Forks really believe that being overrun by deer is a tourist attraction worth being cultivated, despite the opposition of a majority of citizens and to the detriment of the deer population itself?

I have news for them.

Very few of those who stop to take a picture of deer in Grand Forks will turn off Highway 3 to drive down to Market Street to take in the sights, let alone have lunch or buy anything from local merchants.

Moreover, one of these days, some toddler who strays into his or her own backyard will be killed by a swift kick from a doe protecting her fawn and how sorry will you (City Council) be then, for having protected deer over and above your human inhabitants.

Bottom line – I was disgusted by this situation and have withdrawn my support for PETA, which apparently has its head up its ass when it comes to wild animals.

Furthermore, when we visit our friends in Grand Forks in future, we will purchase all items necessary prior to arriving in town.

By the way, this is NOT a new situation. CBC reported on the out of control deer population in Grand Forks back in December of 2009, when over 200 deer were killed (mostly by vehicles) within city limits.