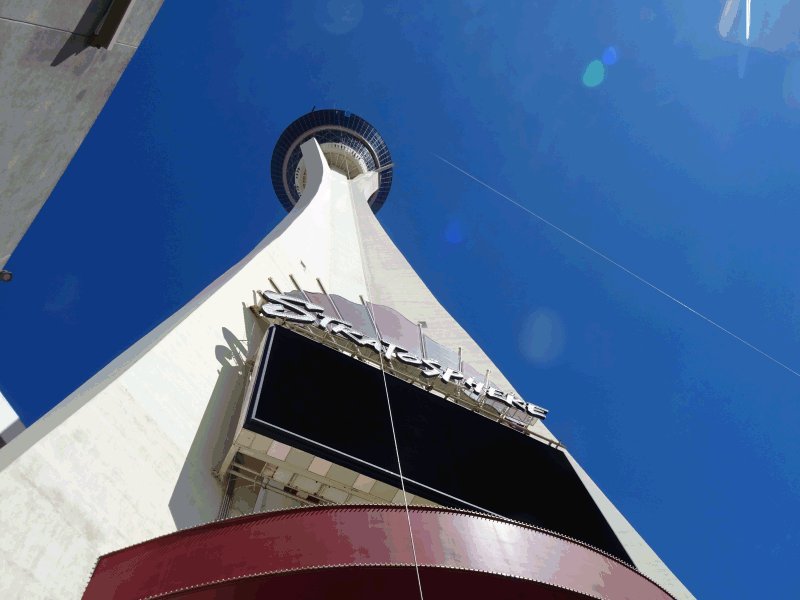 From the RV Park at Circus Circus, I’ve watched folks doing the SkyJump Las Vegas, an 829-foot drop from the Stratosphere Tower since it opened in 2010. I knew that I had to do that jump someday.

I checked in, got suited up and weighed in the SkyJump store and was whisked up to the jumping platform in the elevator. There they did one more weigh-in and 2 more safety checks. It seemed like only a couple of seconds later they had me out on the platform and were saying “3 – 2 – 1 – GO!” and I stepped off the platform.

I honestly wish that I’d been given a moment or two to enjoy the view of Las Vegas from that height! Granted, I think that the staff is eager to get people to jump as quickly as possible so that they don’t back out of doing the jump from fear. 🙂

Honestly, the first split second of the jump seemed slow and controlled. Then suddenly it felt like something gave way and I felt like I was in free fall.

That part was fun. The landing zone, even from halfway up looks like a teeny weeny little dot. Another second and I was back on the ground.

Here’s the video. You can watch it on YouTube if you prefer.

See how fast that was?

Anyway, now that’s done, next time we’re in Vegas, I want to do the rides at the top of the Stratosphere with Ed. They look amazing!! 🙂

Here’s another thing you can do to have fun in Las Vegas.