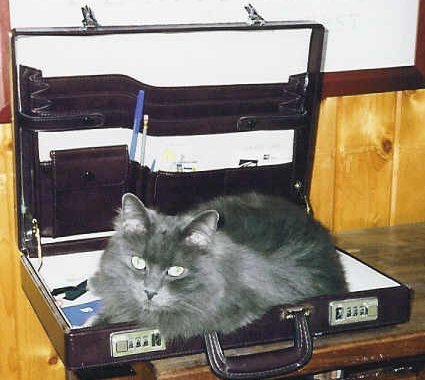 I met Phoenix on an April evening in 1990 at my friends’ Jack and Linda’s house.

He ran from under the TV, straight across the living room, up my lap and chest to my shoulder where he nestled and purred … LOUDLY.

Jack and Linda had 5 cats at the time, and because I’d never seen this one before, I immediately asked ‘is this little guy available for adoption?’

Linda had rescued the sweet 9-month old Nebulung (a semi-long-haired Russian Blue). from a friend’s house where the boyfriend had been abusing him.

That was it, with a word this beautiful kitty was mine.

Good thing I asked too… because the next arrival at the dinner party asked exactly the same question!

I took him home to Castlegar where he immediately made friends with my neighbour’s kids. 5-year old Conrad was able to pick him up and carry him around my house and Phoenix would just lie placidly in his arms for as long as Con wanted to hold him.

Within the year, Phoenix had saved my life.

The year I got Phonenix, I had only been working as an air traffic controller for a very short time when I got sick during the summer… very VERY sick.

I had a continuous raging fever. I would get up in the morning, have breakfast and then need to sleep for several hours more and the situation became progressively worse. I couldn’t get a reasonable diagnosis come hell or high water. One newly-minted doctor in Rossland proclaimed that I had chronic fatigue syndrome (the disease flavour of the day) and told me to consider a new occupation. I didn’t consider that as an option.

In the midst of my health crisis, the government closed the Castlegar ATC unit due to lack of traffic and I was transferred back to Penticton tower and my health got worse. 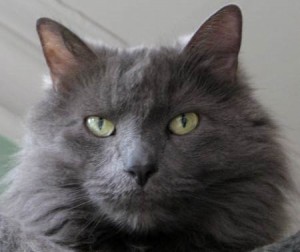 Basically, I was 30 years old and felt quite ready to die – but for the fact that Phoenix needed his mommy… so I persisted day by day by day, just so I could feed him.

The government (my employer) sent me to a shrink who said “you’re not crazy, you’re ill!” and with a number of referrals set me on the right road to health – 2 operations over 6 months and the issue was resolved.

Phoneix and I were together for 15 years.

My funniest recollection of him… I was sitting on the couch when the doorbell rang. I stood up and smelled the distinct smell of shit. Oooooo. The smell followed me to the door. Oooooo YUK! Answered the door, and it turned out to be the boy who had been stacking and splitting wood for me all afternoon. I turned around and went to get him his money. After paying him, I returned to the couch where I saw that Phoenix had defectated where I normally sit. The shit was of course all over the shorts I was wearing. Ooooo. How embarrassing!

Phoenix always had a way of letting you know that he wasn’t pleased with something.

He was getting old and cranky by that point.

He only just learned to tolerate Vic. Poor Vic. I blamed him for almost every cat-induced problem and the in retrospect realized that it had been Phoenix who had been the perpetrator.

Nevertheless, I loved the hairy beast.

Phoenix died of a stroke in May 2005 and his remains now rest in a box in my china cabinet alongside Vic’s. I can’t bear to bury him. He was my first real baby and he’s gonna hang with me and his buddies forever.

P.S. After all was said and done with my illness, I wrote the doctor in Rossland and suggested that SHE consider a new career.