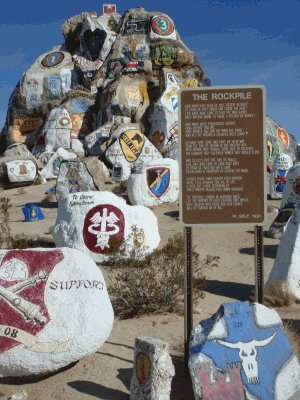 Drive to the middle of nowhere and you’ll find Fort Irwin, where the Army, Navy, Air Force, and Marines send their troops to train for desert warfare.

Near the entrance to the training center, you’ll come across a pile of painted boulders on the right-hand side of the road known as “The Rockpile”.

The Rockpile started years ago when one of the squadrons visiting Ft. Irwin climbed to the top of a hill of boulders and painted their company insignias on one of the rocks.

Over time, other units have transported rocks near the pile and added their own insignias.

Nowadays it has become a spectacle well worth a look if you happen to be traveling to the middle of nowhere.

Actually, the Rockpile is located 37 miles north of Barstow on the Ft. Irwin road.

On the way, you will pass Coyote Dry Lake which is frequently used to film movies, commercials and music videos. We were fortunate enough to see it filled with water which apparently doesn’t happen too often.