After visiting the Stonehenge replica, we ventured west along SR14 which follows the north side of Columbia River in Washington into the Columbia Gorge scenic region.

The Columbia Gorge area consists of almost 300,000 acres of sheer basalt cliffs, grassy plains, thickly forested mountains and a number of distinct places to see, including the following.

A few miles west of the Hwy 97/SR 14 junction sites the Maryhill Museum of Art on a cliff overlooking the Columbia River. The museum was originally built as a mansion by Sam Hill and named for both his wife and daughter, who never set foot on the premises. The Queen of Romania convinced him to turn it into a museum in 1926 and it finally opened as such in 1940. Still traveling west, we happened upon a cluster of cars parked on either side of the highway and saw that it was the trailhead for Horsethief Butte.

Never to miss a hiking/walking opportunity, we ventured out onto the plateau and scrambled up the butte as high as we dared without climbing gear. The trail goes about two-thirds of the way around the butte then descends too steeply for day-trippers in sandals, so we returned via the way we came where we met the real climbers descending en masse about an hour before sunset. One of the highlights of the Columbia River Gorge area is the persistent wind which presents a joyful opportunity for kite surfers.

Back at Maryhill State Park, we watched a kite surfer crisscross the river numerous times to gain some tremendous air everytime he turned at the Washington side. One mile north of The Dalles is the official interpretive center for the Columbia River Gorge.

With permanent exhibits detailing the geologic formation of the Gorge and prehistoric wildlife (did you know that beavers used to weigh 400 pounds or that a ground sloth was 12 feet long?), you follow the history of the area through to more recent times.

After camping for 3 nights, the exhibit that struck me most was a life-size river raft composed of logs atop of which a father, mother, little girl and baby were traveling downstream with all their worldly possessions, including their de-wheeled covered wagon. The man had his ankle lashed to one of the logs with a rope. An audio recording of the parents discussing what they will find at the end of their journey, and how they looked forward to a hot bath. No kidding. Despite the late spring and the fact that the lupines were not yet in bloom, the Tom McCall trail was still very much worth the hike with fabulous views of both Mount Hood and Mount Adams from the top. Minus the lupines, there’s still an abundant variety of wildflowers to be seen, and the promise of much more to come throughout the season.

And although I had read a couple of warnings that the trail is steep in places, we found the trail to be in excellent condition – no scrambling required. Being spring, there’s still some moisture on the path, reducing the risk of sandy or scree slippage on the descent.

Bonneville Dam and the Fish Hatchery

Although the U.S. Army Corps of Engineers exhibits at the Bonneville Dam are excellent with a viewing platform of the dam on the roof and a fish ladder viewing area at the lowest level; the Fish Hatchery is a ‘must-see’ in this location.

The kids can feed rainbow trout, see steelhead trout and see Herman the Sturgeon both from above and below grade. What really turned my crank about the fish hatchery is that the grounds are absolutely stunning. There’s a magnificent azalea (that was in bloom) right at the edge of the parking lot and a numerous rhododendron bushes. The town of Hood River is truly the ‘gem’ of the Columbia Gorge in terms of communities. We happened purely by chance on their popular Saturday Market and the town was uber-busy with both locals and Portlanders enjoying the fine weather, great boutiques and numerous outdoor cafes.

Well worth a look is the alpaca store. You can’t miss it. The owner sits out front with his alpaca that the kids (and kids like me) can pet to feel the softness of its coat. Inside the store, you’ll find an eclectic blend of alpaca clothing (primarily coats and jackets) imported from South America, mixed in with some funky bamboo togs and hemp jeans for the guys. 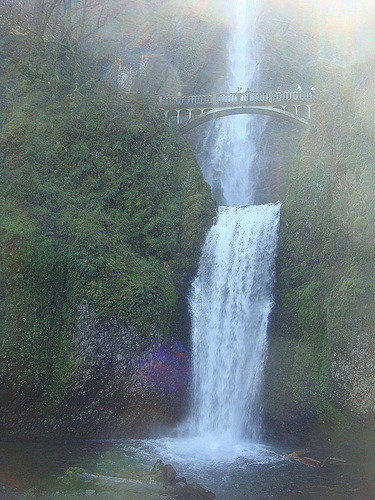 In the Falls area of the Columbia River Gorge is 500 foot high Multnomah Falls which descends in 2 stages. Above the bottom stage is a bridge to which you can get via a short .2 mile walk. To reach the top of the falls from the bottom is a mile long walk. The path is paved for the entire distance.

Suggest you visit Multnomah Falls any time other than on a beautiful day on the weekend when day trippers from Portland and vicinity flock to the Gorge for nature peeping. One of the reasons the stop is so busy is because there are restrooms, a snack bar and a gift shop where you can get that must-have Columbia Gorge t-shirt.

We passed on the $40 Oregon sweatshirts and opted to buy a $30 U.S. Forest Service Recreation Service (N.W.) pass instead.

Traveling east to west, Vista House at Crown Point is the culmination of a trip through the Columbia Gorge. The vista to the east is truly stunning with views of the Columbia River and cliffs receding into the distance.