Upon learning that I probably had lung cancer, based on an x-ray and CT-scan, I decided to enjoy 2 nights in Bangkok, before leaving Thailand and heading home to Canada.

After flying in from Trat, I arrived at the Ramada Plaza by Wyndham, in the mid-afternoon.

I chose the Ramada Plaza specifically because it is located on the Chao Phraya River and the Asiatique night-market was a scant 5-minute walk from the hotel.

On arrival, I was upgraded to an executive suite overlooking Asiatique and the river.

My room was lovely, partitioned into an office area with a desk at the entrance, which overlooked the living room with a TV area AND Asiatique outside, and then, off to the side was a lovely bedroom suite with a king-sized bed and HUGE bathroom, i.e. huge shower AND bathtub. Woohoo! My experience in Asia up to that point did not involve bathtubs, and I LOVE tubbing. However, despite the 30C+ temperatures outside, the hotel room was f’n freezing. I found one thermostat and turned it down as far as it could go, but it seemed to make little difference. I found the second thermostat in the office area the following day… MUCH better.

After 17 days of having had almost no connection with the outside world, I grabbed a Heineken from the fridge and collapsed onto the couch to watch some news. Sadly, the only news from North America was provided by FOX FAKE NEWS, i.e. NO CNN (big FAIL in my view, and which the Ramada Plaza lost a couple of points on my review), so I ended up watching SkyNews from the UK for a bit.

The news sucked – Boris Johnson was about to become the new U.K. Prime Minister, Hong Kong democracy protesters were being tear-gassed, Israel was razing Palestinian homes in the Occupied Territories and Trump was revving up racist attacks on Democratic Congresswomen in the U.S.

So, after confirming that the world was still very much in a state of disarray, I headed over to Asiatique for a lovely evening of shopping, dining, and photography. 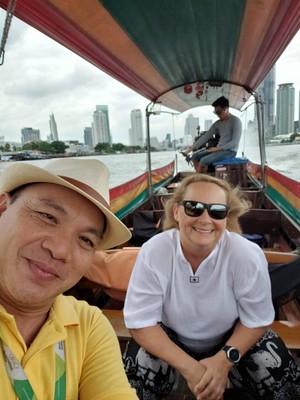 Early the next morning, I headed to the tour desk to book an afternoon of sightseeing in Bangkok, i.e. the half-day river, Grand Palace and Wat Arun Temple tour, including Wat Arun. I was told that I would need to either wear long pants or a skirt to enter the temples and having nothing but a pair of jeans to wear on my return flight to Canada, which would be way too hot to wear during the day in Bangkok, I set out to source a pair of long ‘elephant’ pants so commonly seen in Thailand. The stores nearby had the pants I wanted, all in Thai sizes, i.e. small and extra, extra small, so I put out the big bucks and bought a pair for 5 times what they were worth, at the hotel.
At the time of booking, the desk agent promised that I would have the ‘best tour guide ever’ and although I suspected that she said that to all her clients, she was absolutely right!

The tour guide, Pasith Kasuya, and boat captain picked me up at the hotel dock in the early afternoon for what was one of the very best city tours I’ve ever taken. Granted, I somehow booked a private tour with Pasith, which was so much better than being in a boat with 10 – 20 other tourists. We were on and off the boat at every stop in a jiffy and could move through the crowds at all the sites likewise.

Every part of that tour was absolutely spectacular… see the pictures to which I’ve linked above.

We returned in time for me to spend another evening dining, shopping and taking pictures at Asiatique.

I left the hotel at 6:30 the next morning, enroute to Canada and what would be the next part of my cancer journey.