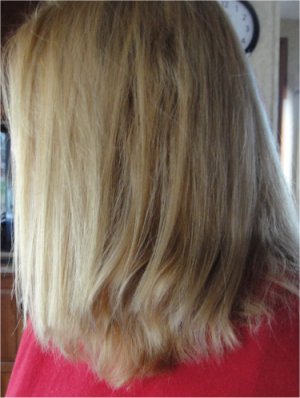 One downside to moving frequently or traveling for extended periods of time is the need to find a good hair stylist.

Basically, it can be a crapshoot.

Most of the time I’ve been fairly lucky with my choices. Haven’t ended up bald or with green hair yet.

But, I think green hair would have been preferable to what I got from a local ‘chop shop’ the other day.

I booked a color and a cut for 10AM on a Tuesday morning and showed up 20 minutes early.

The stylist acknowledged my arrival and said she’d be 10 minutes more with her current client.

An hour and 10 minutes later I finally sat down in her chair.

I probably should have taken the hint and left when she gave me a waiver to sign which included phrases like ‘drastic changes’.

We discussed the procedure. Cover the too obvious roots, add a few foils and give it a good trim.

I was a little puzzled when she did the foils first. But hair technology is not my business, so I figured she was using a different procedure.

Washed out and still wet, I could still see the roots pretty distinctly. Hoping for the best, I thought perhaps it would look different when dry.

Around that point, Ed came in to see whether I was ready and she told him that we’d only be another 10-15 minutes.

I’ve got this voluminous mass of fine wavy hair which has never taken less 40 minutes to cut properly… by anyone.

Five minutes and about 7 snips later she said we were done. No fluff and fold.

OK… no problem. I was planning to hike that afternoon anyway.

About an hour later, I had a look and realized the color coverage just wasn’t satisfactory, so I called and made an appointment to go back.

This time she got the color right and because she didn’t charge me, I gave her a $25 tip.

Later that afternoon I realized she hadn’t washed me out properly and I still had a big sticky mess of color on the back of my head.

As I was styling the do the next morning, I was mortified by what I saw.

There were massive chunks missing in really obvious spots. Some pieces were cut on the diagonal so that the long end was 2 inches shorter than my basic length and the short end of the cut was 3 inches shorter. (The picture does not do the original mess justice – trust me, it was RAGGED.)

It took me a few days to garner the courage, but I knew I had to go back and report the incident — if only to save others from a similar fate.

Fortunately, the woman with whom I spoke was the manager and she promised to make things right.

It was with great trepidation that I sat down in the shop again, but fortunately, the second stylist was much more adept and did the best she could with the mess.

It looks better than it did, but I can hardly wait to get back home and have Lindsay fix it up properly.