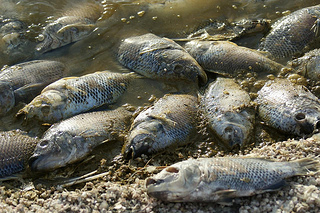 I did some homework before heading down to see the Salton Sea and by almost all accounts, we fully expected the smell to be nauseating.

From the picture posted here to the right, you can see why.

The smell wasn’t nearly as bad as we’d been led to believe, however. Don’t get me wrong – the odor wasn’t pleasant by any stretch of the imagination, but it wasn’t so bad as to be sickening.

Here’s some interesting information about the Salton Sea, from the California Parks website:

One of the world’s largest inland seas and lowest spots on earth at -227 below sea level, Salton Sea was re-created in 1905 when high spring flooding on the Colorado River crashed the canal gates leading into the developing Imperial Valley. For the next 18 months the entire volume of the Colorado River rushed downward into the Salton Trough. By the time engineers were finally able to stop the breaching water in 1907, the Salton Sea had been born at 45 miles long and 20 miles wide – equaling about 130 miles of shoreline.

So, why the dead fish?

The fish are tilapia, the only species that can survive in the Salton Sea, which has a salinity level that averages around 4% (saltier than seawater) and sometimes exceeds 4.4%.

The fish kills (and the smell) is due to periodic algae blooms caused by fertilizer runoffs from the surrounding agricultural area.

In addition to the odor, the Salton Sea beach isn’t exactly a walker’s paradise. I wore sandals on my first venture down to the beach which was a BIG mistake. It’s a barnacle beach and UGH! those things hurt when you step on them! 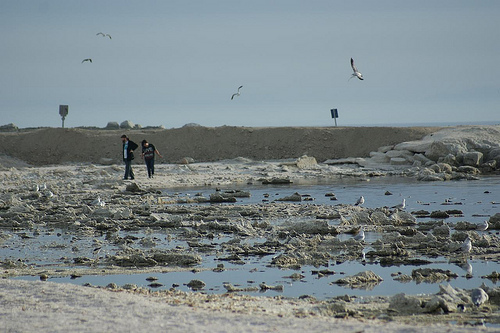 Other than those drawbacks, we liked the place well enough to spend 2 nights at the RV park which is located right beside the Salton Sea Visitor Center.

The birds were amazing, the trail walking was great and the sunsets were spectacular (mostly due to the air pollution drifting in from up the valley). Although the Visitor Center is not very big in terms of displays, the staff were superbly knowledgeable and helpful. In the 2 short days that we spent there, activities such as talks, bird-watching and kayaking adventures were made available to visitors. 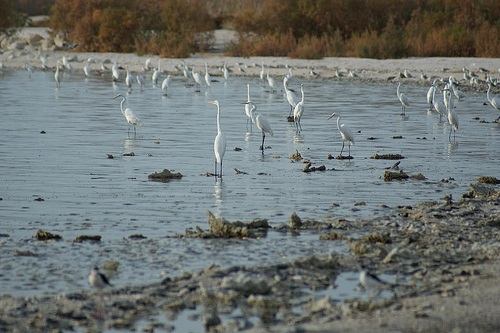 Sadly, the Salton Sea SRA is slated for closure in July 2012. Despite the smell and prickly beaches, I still give it a thumbs-up in terms of “must-see places”.

You can see more of my Salton Sea pictures here.